According to me, mountainous PARO is the heart of of Bhutan and the very image that a beyul conjures in my mind. The only international airport in Bhutan is located here since the valley is slightly larger than Thimpu.

Paro’s Taktsang Monastry known the world over at the Tiger’s Nest monastery has almost become the iconic symbol of Bhutan in news and print media. The world is full of buildings that are beautiful to look at, while being major feats of engineering, but the first sight of the Tiger’s Nest monastery as it precariously clings to the side of a mountain is an engineering feat that would take years of intricate planning to even begin replicating. The most peculiar feature of this monastery is its isolated location. While it makes for a breathtaking sight and beautiful pictures, it also creates a very unique problem. It is said that in 1998 when a fire started at the monastery, it was completely burnt to the ground as the temple was hard to access and emergency assistance was impossible due to its location and lack of telecommunication. 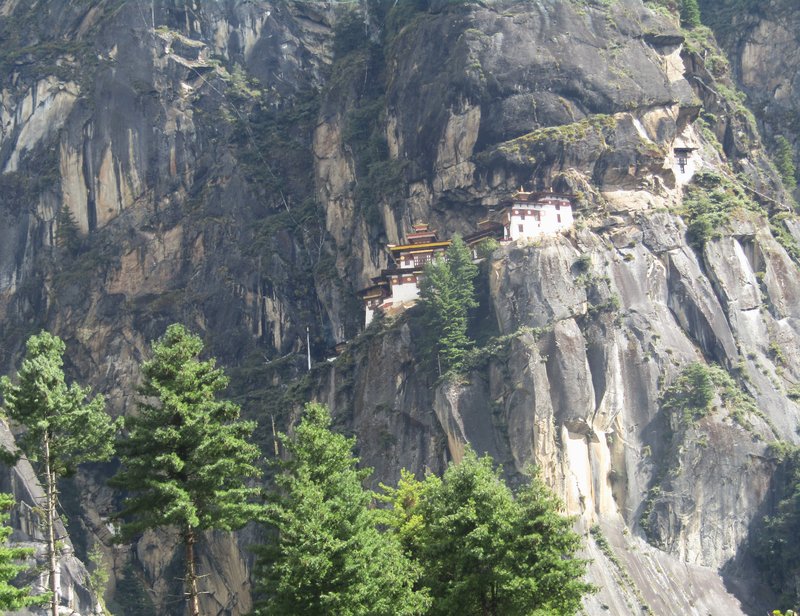 The trail cuts through a forest of pine trees and decorated with prayer flags symbolising protection from evil forces and blessings of good luck and positive energy. Every time I stopped to catch my breath I was treated to magical views all around. I heard at a rest stop that there are two other paths that pass through a plateau called “a hundred thousand fairies” plateau.

My lungs and legs gave up as I reached the halfway point and I spent four delightful hours in the company of women from around the world (at one point we even arrived at a consensus that we could start our own UN!!)
During a quiet moment of reflection as I sat there in the shadow of the Tigers Nest, I found myself wondering what contentment drives monks to a life so high up in the clouds. And then it dawned on me as I stood there in the light drizzle and a hint of warm sunlight pouring through the dark grey sky in the presence of the majestic Himalayas while far below on the other side was a valley filled with folks who live simple lives but experience simple joys - THIS IS AS CLOSE TO DIVINITY AND GOD THAT MAN CAN COME CLOSE TO. 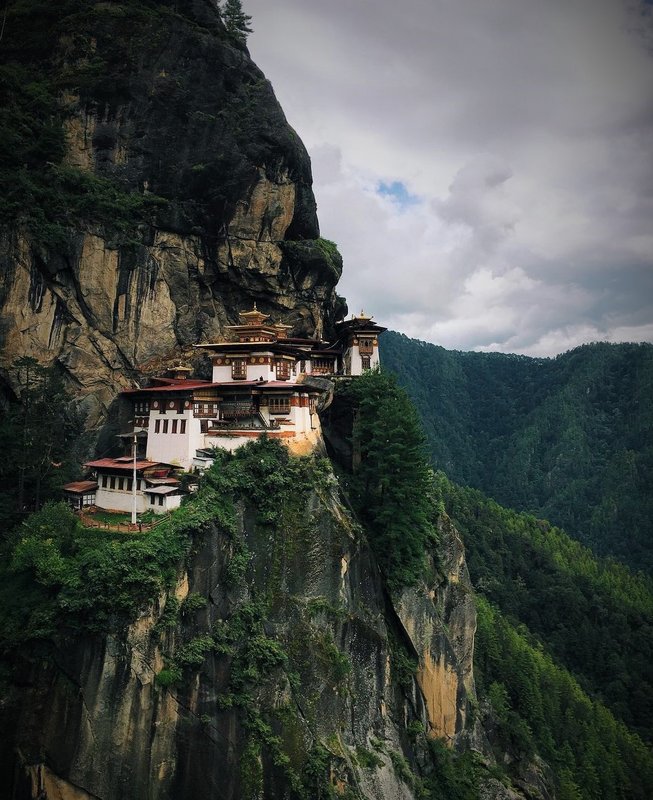 My friends who trekked the rest of the way and completed the most ardorous part of the trek. Apparently there are the 700 or so steps cut out of rock that first descend to the valley, go past a gushing waterfall on the bridge and then ascend in another long staircase but they did say that the monastery is beautiful with traditional architecture, astounding views and was worth having the wind knocked out of you at times during the ascent.

I highly recommend that you book a nice massage and a traditional "hot stone bath". The tubs for the hot stone bath are constructed of wood and the stones are placed in a section of the bath water. Attendants place more heated stones to the water to bring up the temperature of the water.
Found it to be a perfect way to spend my last evening in Bhutan.

Posted by Ceej 06:27 Archived in Bhutan

Previous Next Table of contents

Comments on this blog entry are now closed to non-Travellerspoint members. You can still leave a comment if you are a member of Travellerspoint.

If you aren't a member of Travellerspoint yet, you can join for free.